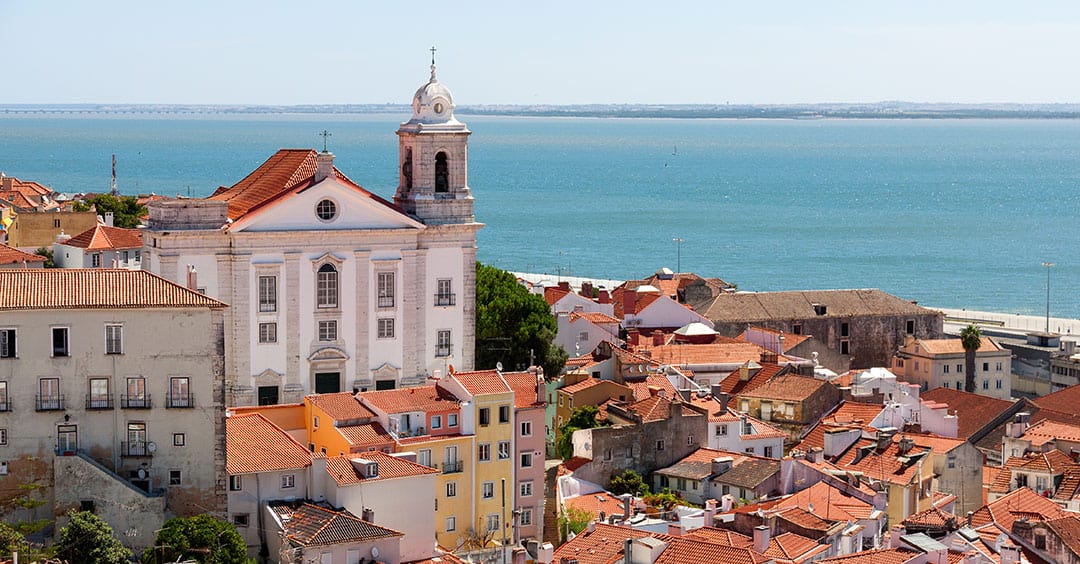 Alfama is most known for its maze of paths winding through a photogenic village. But beyond that, you’ll also find some of Lisbon’s biggest attractions, great panoramic viewpoints, and the chance to experience traditional Portuguese fado music there.

On this page, I’ve written a comprehensive guide on what to do, where to stay, and where to eat in Alfama. Once read, you should have a good idea of what to expect from this popular district.

Alfama is Lisbon’s oldest and most charming neighborhood, with a history going back many centuries. The Romans, Visigoths and Moors have settled here at different points in time, but the Moorish influence has been the strongest.

The name Alfama comes from the Arabic word “al-hamma”, which means baths and fountains. During the Muslim occupation, the Moors were the ones who designed the district’s famous narrow and winding streets, which served as a method of defense.

Alfama was the only district in the city to survive the great Lisbon earthquake of 1755, so a visit there is a good chance to travel back in time and appreciate the picturesque, traditional architecture that represented the city before the earthquake.

Wandering around the streets of Alfama will bring you to popular attractions such as Lisbon Cathedral (Sé de Lisboa), Alfama Castle (Castelo de São Jorge), and the Feira da Ladra flea market.

This lively district is also the birthplace of traditional fado music. Hence as the sun sets, you can hear the lovely sounds of guitars and mandolins filling the air.

Things to Do in Alfama

The winding streets of Alfama are home to several well-preserved historical attractions, laid back places to enjoy fado music, and a centuries-old flea market.

Below, I list some of the best things to do to give you a good idea about what’s there in order to make the most out of your visit.

Lisbon Cathedral is also known as Sé de Lisboa, and it’s the oldest church in the city. Built back in the 12th century, the cathedral has survived several natural disasters over the centuries, including the earthquake in 1755.

Interestingly, the Sé was built on top of an important mosque after Christians settled in the city during the 12th century. You can see the remaining foundations of the mosque in the cloisters at the back of the cathedral, which have been partially dug away.

Located on the highest hill in Lisbon, Castelo de São Jorge can be seen from almost anywhere in the city. A lot of the castle was destroyed over the centuries, but you can still see the oldest parts that were built back in the 6th century, and some walls and towers restored in the 1940s.

You can climb those towers and walk along the walls for some great views across Lisbon, or visit the peaceful castle gardens, where you can spot some peacocks roaming free.

Being a hilly city, there are several spots in Lisbon which give you views over the city. Of these viewpoints, Miradouro de Santa Luzia is the most popular and romantic one, thanks to a pergola with brightly colored bougainvillea flowers climbing around it.

From this terrace, you can get dramatic views of Lisbon city and the Tagus river. It’s on the route going up to Castelo de São Jorge, so it’s a good spot to catch your breath and enjoy the tunes of street musicians before making your way up to the castle.

One of the highlights of Lisbon is taking a ride on its iconic yellow number 28 tram, which runs through tourist districts in the city, including Alfama. First introduced in the 1930s, the tram is still used today because the steep and narrow streets of Lisbon are unsuitable for modern trams.

As the tram is very popular, it’s best to take the tram early in the morning when it’s less crowded to avoid queues. Another tip is to board the tram at Praca Martim Moniz where the tram line starts, so you can get a seat looking out the window for good pictures!

“Feira da Ladra” is often translated to “Thieves’ Market” as ‘ladra’ refers to a female thief in Portuguese, but this flea market actually gets its name from “ladro”, a bug often found in antiques. There, you can find everything from handmade crafts, books, clothes, coins and other antiques.

The market dates back as far as the 12th century, though it’s only in the 1880s that it settled at its current home at Campo de Santa Clara. It’s held every Tuesday and Saturday from 8am – 5pm, but it’s best to go in the morning as most things worth buying are likely gone by early afternoon.

Take a Walking Tour around Alfama

If you prefer to know more about Alfama’s main attractions, consider joining a walking tour around Alfama like this one. You’ll visit landmarks like the Lisbon Cathedral, Castelo de São Jorge, as well as the National Pantheon, and go to one of Alfama’s viewpoints while learning about fado music.

Immerse Yourself in Fado Music

As Alfama is where fado music was born, it’s one of the best places in Lisbon to experience this Portuguese music genre. In the day, you can visit the Fado Museum, where you can learn about the history of fado, the fadistas, or fado singers, and also instruments related to fado.

After visiting the museum, you can have dinner at a fado house, which is one of the best things to do in Alfama at night. Just take a walk along Alfama’s maze of streets, and you will find many of these restaurants offering fado performances with dinner.

There are many of choices for restaurants in Alfama, from small cafes offering snacks to laid back restaurants where you can enjoy hearty meals with local wine.

Here, I describe 3 of the best places, where you can taste some of the most popular and unique foods in Alfama: bacalhau, bifana, and pastel de nata.

Bacalhau at Agulha No Palheiro

Bacalhau, or salted cod, is one of Portugal’s most popular comfort foods, and can be found prepared in many different ways.

When in Alfama, head to Agulha No Palheiro to try some bacalhau. The restaurant is just a short walk away from the Fado Museum, and has a slightly dated shopfront – but don’t let that stop you, they offer many good Portuguese dishes, of which bacalhau and pork belly are the top recommendations.

Bifana at As Bifanas do Afonso

If you’re looking for a snack or a meal on the go, give bifana a try. Bifana is a simple dish of thinly sliced pork marinated in white wine, garlic and spices, and served in a bun. It’s best enjoyed with a cold beer 🙂

To try bifanas, head to As Bifanas do Afonso on the edge of the Alfama district. The store is quite small and easy to miss, so keep your eyes peeled for the understated entrance. As space is limited there, you can bring your bifana to a nearby square to enjoy if you can’t find a seat.

Pastel de nata are popular egg tarts with an interesting history. They have their origins in the 1800s, where monks in monasteries regularly used egg whites to starch clothing, and then used the leftover yolks to make pastries and cakes.

A good place to try pastel de nata in Alfama is Pastelario San Antonio, around a 10-minute walk down from Castelo de São Jorge. Apart from the famous pastel de nata, it also sells several other pastries, as well as ice cream.

Where to Stay, from Budget to Luxury

There are a good number of choices for accommodation in Alfama, so help you decide where to stay, I’ve listed some of Alfama’s best hotels based on budget.

Palácio Vila Flor offers budget stays in traditional Portuguese villas, located just a 5-minute walk away from Lisbon Cathedral. There, you can choose from basic rooms with shared bathrooms, or 1 to 3-bedroom private villas depending on your budget and size of travel group.

The hotel has a terrace where you can enjoy a simple breakfast with river views in good weather. If you need to get some last-minute souvenirs, there’s also a gift shop selling traditional Lisbon crafts.

Hotel Convento do Salvador is a former convent, now converted into a modern, minimalist hotel. You can choose from single, double rooms and suites, some of which have partial views out to the Tagus River.

The key highlight of the hotel is no doubt the location. Lisbon’s famous number 28 tram passes right outside the hotel, and it’s within easy walking distance to the Lisbon Cathedral, Castelo de São Jorge and other popular attractions.

For a luxury stay truly unique to Lisbon, consider Solar Do Castelo. It’s the only hotel located within Castelo de São Jorge’s walls, built on the site where the former palace kitchens used to be. The hotel is furnished to respect the history of the site, in a traditional style.

The hotel has a 24-hour honor bar stocked with beer, wine and other types of alcohol, so you can relax with a drink at any time of the day. Head to the hotel terrace, and you may also spot some peacocks that have wandered over from the castle grounds 🙂

How to Get to Alfama from Lisbon Airport

Alfama is a very hilly area with almost no public transport options. The metro network and Aerobus shuttle service that links the airport with the city center do not pass through Alfama, and local buses do not allow large luggage bags on board.

That said, there are still a few options for getting from Lisbon Airport to Alfama. Of these options below, the most budget-friendly one is a van airport shuttle, while the most comfortable and convenient option is a private transfer.

100rumos is a company that runs private shuttle services in Portugal’s major cities, including Lisbon. A one-way journey from Lisbon Airport to Alfama starts from 6 euro, and will take around 20-50 minutes, depending on traffic conditions and the number of stops that need to be made.

A convenient way of getting from the airport to Alfama is via taxi, which costs around 20 euro and will take 20 minutes in normal traffic. To ensure that you won’t be surprised by inflated fees by the drivers, you can buy prepaid tickets at the airport.

Private transfers are the most comfortable option for getting to Alfama from the airport. You’ll be picked up right at arrivals, and get to your destination in about 20 minutes. The price for a one-way journey in a 4-seater sedan starts from 22 euro.

Alfama is a charming district with plenty of character, where you can spend hours wandering amongst the streets, and appreciate architecture that has been standing since the 1700s.

It’s perfect for a laidback day of sightseeing, where you can go from visiting historic attractions like the Lisbon Cathedral, to having a leisurely dinner with fado music at a fado house. Alfama is also where you have the rare opportunity to stay inside the walls of an actual castle!